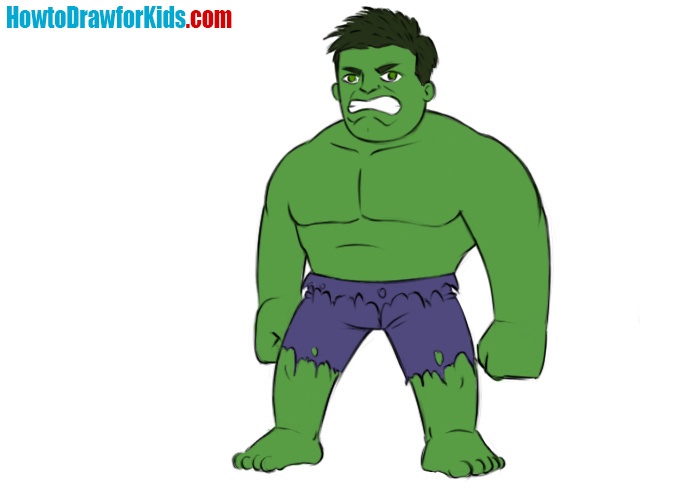 So, I continue drawing lessons about the Avengers. I really like superheroes Marvel, I can’t help it. And today I will show you how to draw the Incredible Hulk for kids. I think the Hulk is a rather unusual character. The fact is that he is a member of the Avengers. And at the same time, he often becomes one of the main problems of the Avengers. I think you probably remember how often he gets into skirmishes with Iron Man.

Draw the contours of the torso and head. Look at the torso and you will see that it has a strong narrowing towards the belt. You should draw broad shoulders to make this narrowing is more noticeable. A little to the left than the center of the face we have two intersecting lines. It will be a great guide for drawing facial features in future steps.

Now we draw the contours of the limbs. These are only approximate shapes that show us the position and size of the arms and legs. There should not be smooth bends. It should look like coarse large cylinders.

Eyes should not be angled. But eyebrows must move to the nose to make our character look angry. Disheveled hair fit this expression as well as possible.

In this step, we draw the shreds that are left over from Bruce Banner’s pants. We will also draw the contours of very large pectoral muscles and toes.

We check the previous steps for correctness. This is really very important because in the next steps we will draw the final details. So if everything is fine you can draw the pupils inside the contours of the eyes and hair details. After that you can erase the lines that we used as waymark.

Now let’s try to remove all the extra lines from the upper torso. After that we will draw the final contours with dark confident lines. 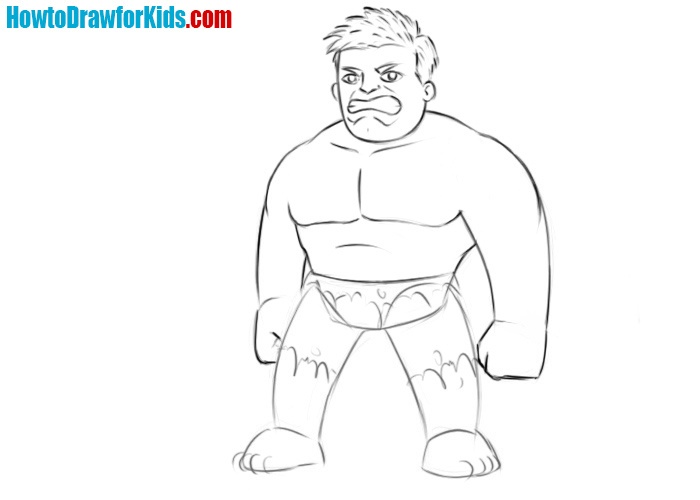 Repeat the steps from the previous step. Only in this step we will work with the contours of the legs and pelvic area. 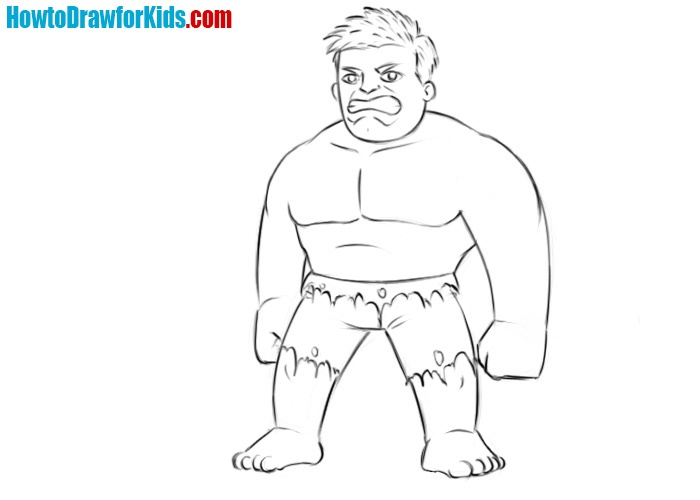 You probably know that the Gray Hulk and the Red Hulk exist, right? But today we are drawing the green Incredible Hulk, which is familiar to us all. By the way, did you notice that the Hulk always wears pants of the same color?

Speaking of coloring options. Did you know that the Hulk originally had gray skin? We decided to recall these glorious times and present you the Grey Hulk: 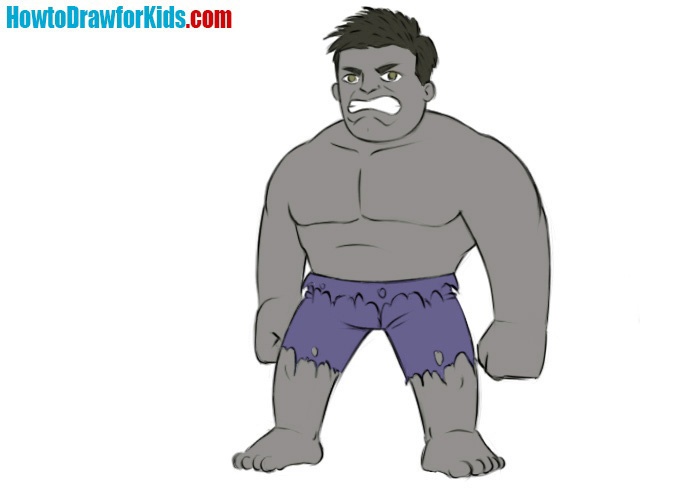 Also do not forget about the Red Hulk. He is one of the main enemies of our hero: 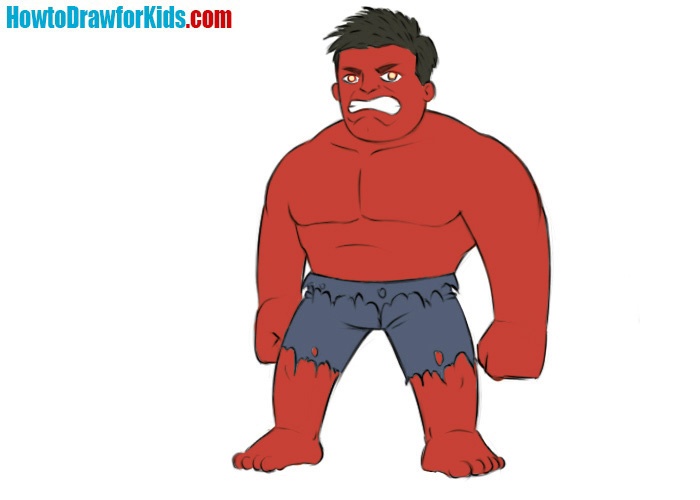 I also could not ignore the fact that the well-known Wolverine from the X-Men first appeared in the comics about Hulk. They had a pretty fierce fight in fact. 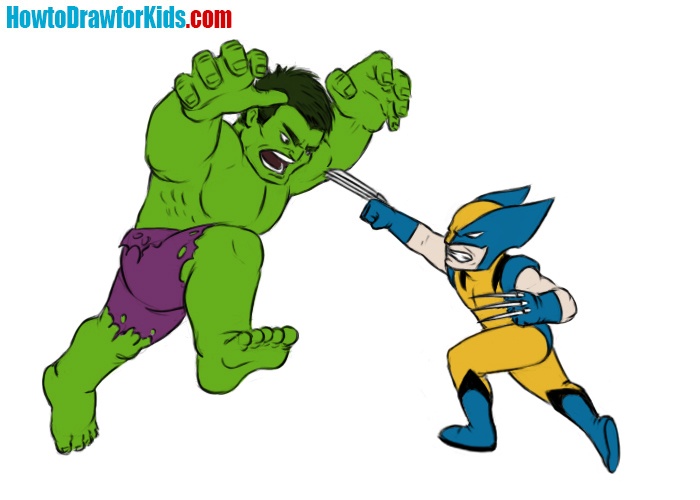 And as always, I can not leave you without a small sign that will help you draw the Incredible Hulk at any time. 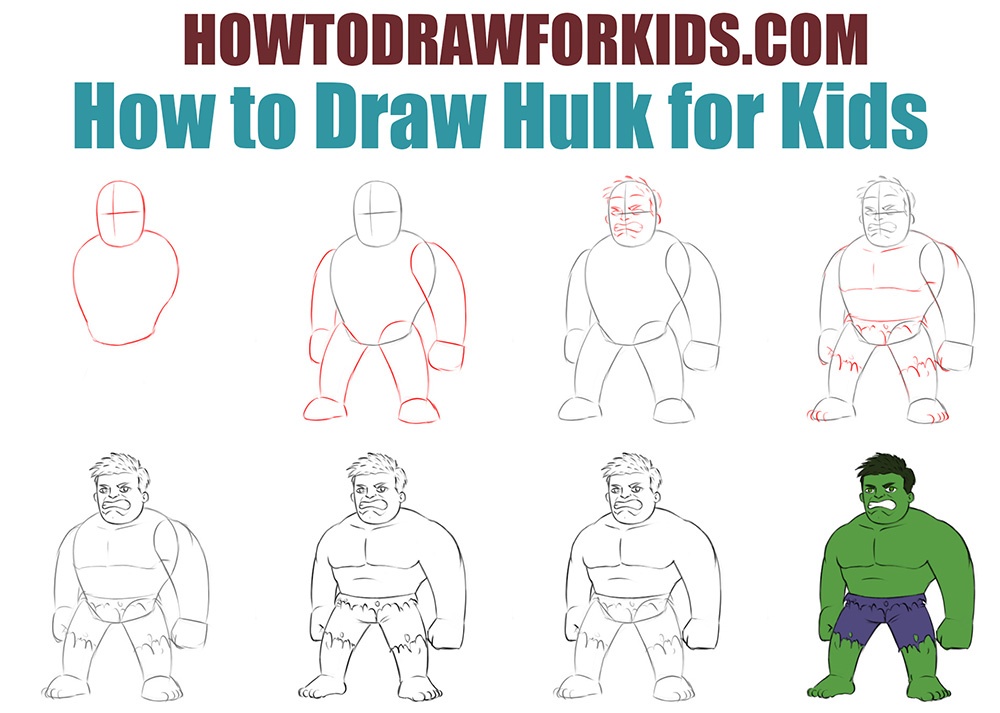