I created some drawing lessons on how to draw comics characters. As you know, I really like comics. But today I decided to create an article about the warrior of medieval Japan.

In this step we will draw the contours of the torso and head. First of all, let’s define the style of drawing. We have a drawing style in which all the characters look like a cartoon. And that is why we draw a large head and a small, elongated body.

Now we draw the limbs. It must convey the dynamic posture of our samurai. The samurai’s right hand is tightly pressed to the body. And samurai’s left hand is slightly set aside.Note that the right and left elbow joints form 90 degree angles. Samurai’s right leg bends and forms an obtuse angle.The left leg is completely straight.

With the help of short lines with a smooth bend, we draw the mouth and nose. The samurai’s right eye is located on the horizontal line from the first step. The left eye is located at a slight angle.

The samurai did not walk with their hair disheveled as you probably know. Therefore, we draw the contours of the hair that are collected in a dense bunch.

In this step, we wipe off the extra lines from the menacing and concentrated face of the samurai. Draw a few horizontal strokes in place of sideburns. Add an icon that looks like the letter “S” inside the ear contour.

In this step, I delete the extra lines from the clothes of our samurai. We should also draw a fist that looks like a trapezoid inside which there are three vertical lines.Pay attention to the small folds of tissue in the elbow joints.

Probably the samurai is not the only famous warrior of medieval Japan. Everyone has heard about the mysterious and deadly ninja warriors. 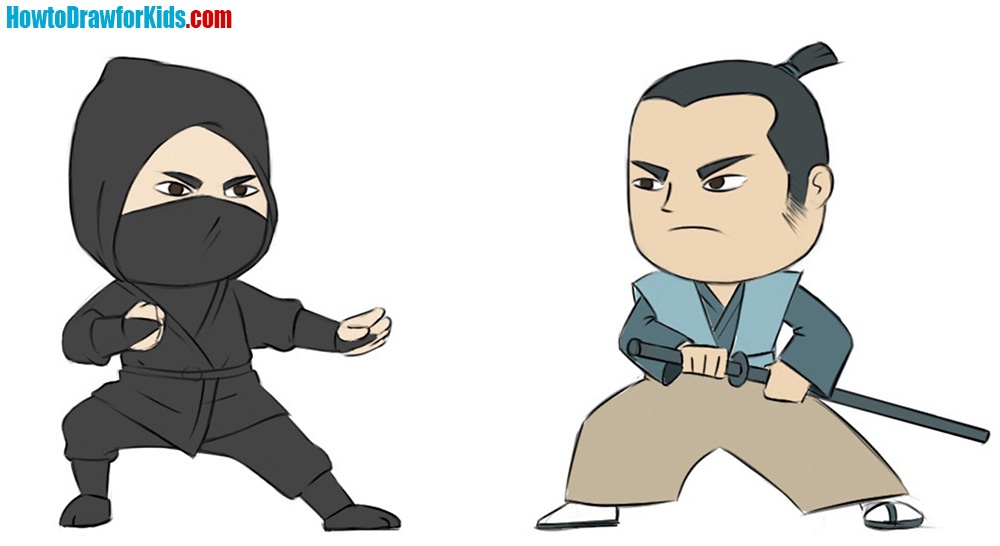 And also do not forget to look at a brief drawing scheme of a samurai that I have prepared for you.